Already a few month back we joined an adventure tour group to kayak through Langkawi’s UNESCO protected Geoforest park. The day before we had arrived on this incredible Malaysian island and even though the resort (and especially its infinity pool) was unbelievably alluring, we made it in time for the pick up at the lobby and were taken to the mangroves. It actually didn’t take that much convincing to excite us for the adventure since we had been looking forward to it for weeks – as a suggested activity in our LP it was very easy to find and book the desired trip online way in advance of our holiday. Early after breakfast the guides came by our resort and picked us up as the last passengers on their mini bus and drove us 45 minutes up to the other side of the island. Some of our fellow passengers split from the group to undertake the mangrove boat trip, whereas us and six others went on to paddle through the maritime forest ourselves. Or so we thought. Actually, the first stop on our agenda was the Gua Kelawar, a small cave inhabited by a few hundred bats. There used to be thousands of horseshoe and roundleaf bats living in the cave, but tourism and the subsequent spot-lightening of the dark interior forced them to abandon the place. When the bats were gone the tourists stayed away as well, so as a compromise the agencies removed the floodlights and returned the stone hall into complete darkness again, allowing only small groups of visitors to enter the cave with one flashlight (handled by the tour guide). After a while, this measure convinced a few bats to re-inhabit the cave, but the colony is still much smaller than it used to be before the human intrusion and the continuous disturbances by disobedient tourists with cell phone lights and camera flashes (a lot of them Chinese, unfortunately). When our group entered the bat cave through a small hole in the mountain wall, there were still a few bats hanging from the ceiling. You could guess from the dark pee stains on the stone walls that it used to house many more winged creatures, but even so we were warned not to look directly up to avoid getting bat droppings into our face/eyes. Another interesting feature of the bat cave were the stalactites and stalagmites that at some points went floor to ceiling in intricate shapes, some of them even connecting in the middle to form a delicate pillar. 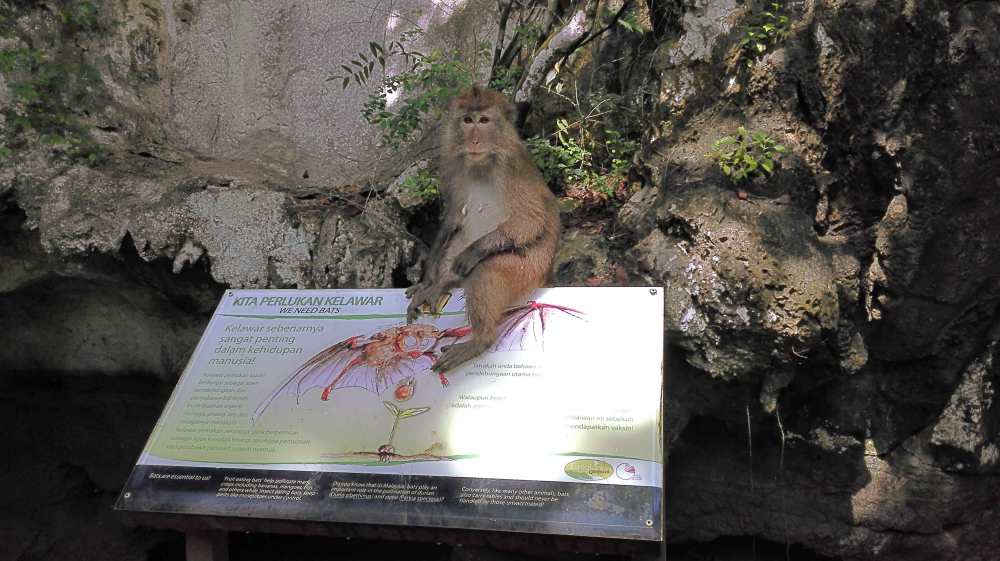 Occasionally, a macaque monkey would walk along the baluster of the wooden bridge that wound through the cave, prompting the two tour guides to remind us to keep a close eye on our belongings (they love to steal things/food). They also asked all of us not to feed the monkeys with anything we brought with us, since it obviously disturbs their natural hunting habits and makes them depended on tourists to bring food to them. Apart from a divers diet of fruits, leaves, and small birds, the monkey’s full name “crab-eating macaque” suggests that they also go for small crustaceans they find in the brackish water of the mangroves. Since these crabs live in somewhat salty and sandy water, the monkeys sometimes wash them in fresh water before devouring them. I would have loved to see this eating habit, but unfortunately a large group of Chinese tourists (all with their own flashlight) existed the cave after us, some of them handing out crackers to the monkeys, completely drawing the animals’ attention towards them.

On our way to the dock of the small water village to board our kayaks.

It was time to return to the petrol-powered boat that had brought us to the bat cave and begin the actual kayaking tour. Since the kayaks are kept on the docks of a small water village upstream, the boat followed the water way right through the towering lime stone mountains the geopark is famous for. The people living there depend on gas and oil from the “mainland”, so our boat picked up two men carrying a gas tank and some other tools. They didn’t want to keep us waiting too long, so once out boat was moored the men quickly grabbed their supplies and came on board. Or they tried. Right in the moment the first guy stepped onto our boat,  a bow wave from another passing boat rocketed our boat and made him sway dangerously close to the water. And just when we thought he had regained his balance he and his gas tank went overboard. Luckily he hurt nothing but his pride and since it was around noon and temperatures were close to 30 degree C at least he didn’t have to worry about his wet clothes. 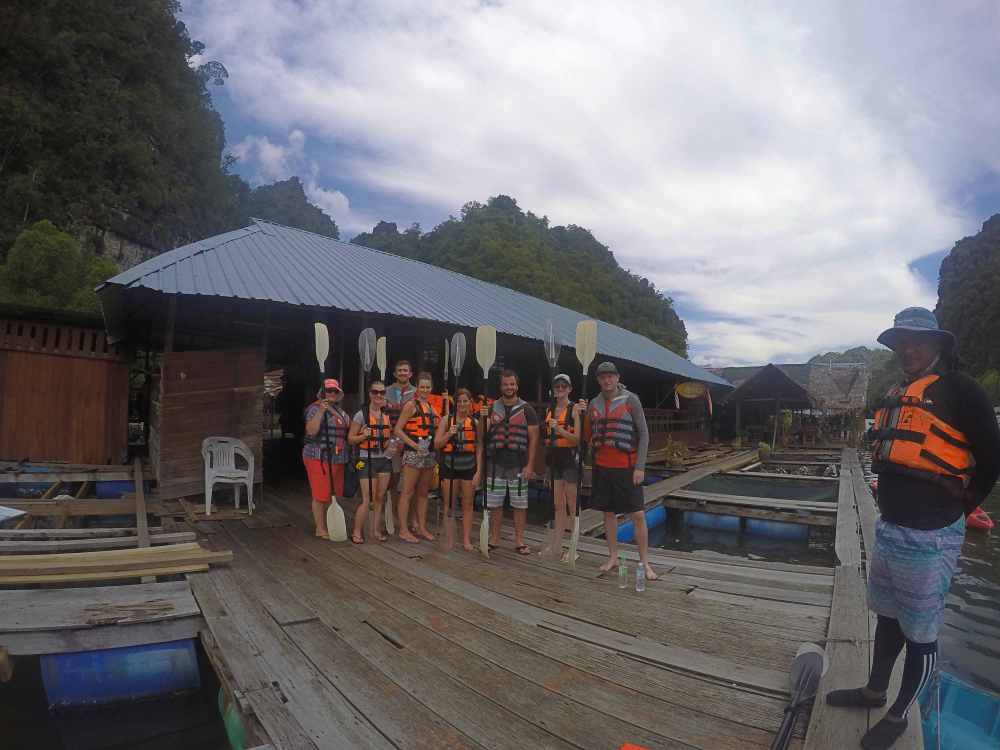 Finally it was time to gear up and prepare to get onto the water. After donning a life vest everyone received a paddle and a short but concise introduction to kayaking. We all booked the trip in pairs so each team of two was assigned one kayak and we set out to take a few careful rounds close to the dock. It was unexpectedly hard to coordinate the movements of the two paddles, not to mention more complicated moves like making a turn or navigating through the narrow mangroves. Even though Jelte & I both thought that we already had some good practice from rowing during our time in Duisburg we discovered that kayaking is an altogether different discipline (not that we were experts at rowing). It was beautiful to be on the water and have the prospect of a few hours of kayaking exercise ahead of us. We didn’t dress for the occasion though: late summer days on Langkawi see a lot of clouds in the sky, sometimes even rain, but still the temperature is very high and when the sun does come out, it is very hot on the skin. It didn’t take us long to understand why our two tour experienced guides were wearing long pants and sleeves, plus a scarf around the neck and a broad hat, despite the heat. Within the first few minutes in the kayak we felt a sunburn develop on our shins and shoulders and we were very grateful when the tour began and we entered the shade of the mangroves. 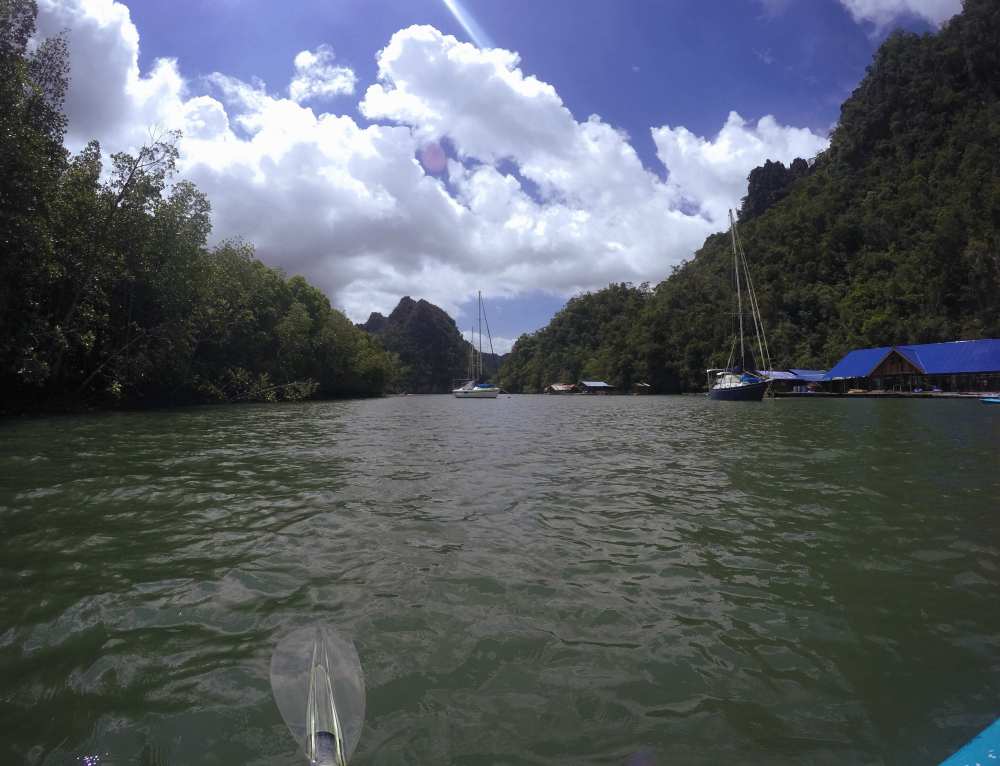 The sun peaking through the clouds and reminding us that we forgot to wear long sleeves in the kayak.

To get to the entrance of the mangroves we had to cross the lake and paddled a few hundred meters downstream. I would have missed the small gap between the roots if the guide hadn’t shown us the way in. It was so narrow that we could only enter one boat after the other and were greeted by a small group of macaques that roamed the roots in search of a meal. They make use of the low tide to climb in between the otherwise submerged root system of the mangroves looking for clams and crabs. I wouldn’t have though that the tide could have such a strong influence on the water levels of the mangrove’s brackish water, but even the river that flowed right past the visitor center dries up when the water levels fall. With the water gone from the lake many iguanas wade through the mud and mud-skippers show off their jumping skills. There are even some parts of the mangroves that can’t be accessed by kayak, let alone boat when the water sinks, and depending on the time of the day the guides pick a different route for the guests to explore the mangroves.

A gap in the the lush green of the mangroves opens onto a large lake, and ultimately, the Andaman sea.

Within the forest all sounds seemed subdued and a pleasant calm unfolded. We slowly made our way through the tangles of the roots looking for animal life, and the first mangrove inhabitant we saw (after the macaques, who strictly wouldn’t count) was a small black snake coiled up underneath a knot of roots. We had found a poisonous viper that was on the hunt for small fish. All sorts of ocean as well as freshwater fish use the protection of the mangroves to lay eggs and raise their offspring, since the narrow root system makes for a far better nursery than the open ocean/water. Unfortunate for the fish that is no obstacle for the small viper waiting well-hidden and camouflaged close to the surface. After about an hour we exited the first mangrove forest and went out onto a large lake enclosed by karst mountains and water forest on all sides. Through an opening at the far end we could see the open sea but we simply crossed the lake and entered another batch of mangroves through a narrow gap in the trees like before. In the middle of the lake we noticed a few eagles circling above us, their wings spread wide in flight, observing the surface of the water below.

It didn’t take long to understand why the majestic birds were flying above us. Soon after we encountered a tourist boat stirring up a fountain of water behind it and it seemed as though the eagles associate the revving sound of the gasoline motor with being fed. Unfortunately tourist (and tourist agencies) keep feeding them to attract greater numbers, a practice that ruins the natural hunting instincts of the birds and makes them lazy. In many ways, this is quite dangerous for the eagle population, especially because the fatty diet weakens the shells of theirs eggs to the point that they break before the baby eagle can hatch.

The agency we chose for the mangrove tour had decided long ago that they would not take part in the manipulation of wildlife just so that visitors could get a closer look at the animals. It is always a fine line between ethical tourism and the mere exploitation of nature in pursuit of the biggest profits, and so we are grateful that more and more preservation programs are called into life to protect the scarce and often fragile ecosystems and still make it possible for people to experience them up close.