You might say we chose a less than optimal time of year to travel from China to Vietnam, because not only was the whole of China on the move, Vietnam also was amidst the New Year celebrations, which is more commonly known as TET. Since we have never been to Vietnam before and did not have any particular expectations, I have to admit we did not notice the effects of the holidays all that much. We might have been able to make more frequent use of public transportation instead of having to rely on private cars to go somewhere. But since neither of us speaks or reads Vietnamese, and the results of our online research suggested that especially the far North does not have a formally organized bus schedule yet, it might have been our vehicle of choice no matter what. That is also why we were greeted by a private driver the moment we made it over the border and entered Vietnam, which was fairly straight forward to organize: During the travel preparations we contacted one of the suggested (and tested) hotels in Bac Ha and the owner, Mr. Dong, turned out to be a very valuable contact in the Vietnamese hinterland. He confirmed that no buses would be serviced during the TET and offered to help us organize a car from the Chinese-Vietnamese border into Bac Ha. Admittedly not the cheapest way to take on the 90 minutes drive over narrow and winding country roads, but an earned luxury after the 5 hours train ride to get here. And indeed, we did not see a public bus until three days later when the holidays came to a slow end. 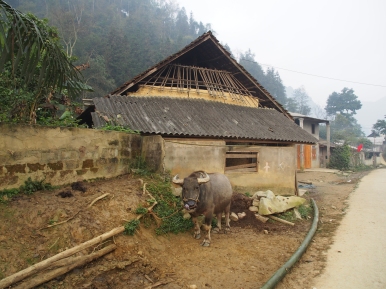 Water buffalos are the main investment for families in Northern Vietnam’s mountainous areas. If need be the animal is sold so that upcoming expenses can be covered more easily (i.e. for marriages, funerals…) 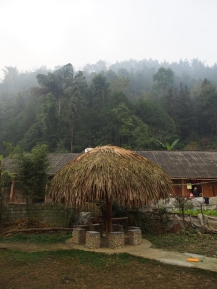 Note the thick jungle behind the hut? At times it was impenetrable and we were very thankful for the crude but regularly maintained dirt path. 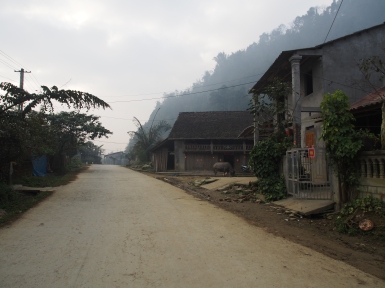 It was the dry season during our visit in Northern Vietnam, but every morning we were greeted by deep fog and clouds nontheless.

The first night we slept a few kilometer outside of Bac Ha in a rural homestay. Virtually all hotels in the main part of town were closed for the holidays anyway, and the cute Vietnamese family of four that took us in welcomed us into one of their newly renovated rooms. Although this wasn’t a standard hotel (or even hostel) room, it strikingly demonstrated how scarce the living conditions up in Northern Vietnam are. And yet, our room was clean and furnished with a matress on the floor and a thick blanket with two cushions. That was it – no other furniture. A tour around the house reveiled that the homestay owners had a similar bedroom, which they shared with their two children. The building’s roof was covered with palm leaves, the windows had no glass and the door to our room could only be closed with a small padlock. We shared a wet cell with the owners, which to our surprise had a western style toilet but no shower, just a tube that could be fitted onto the faucet. 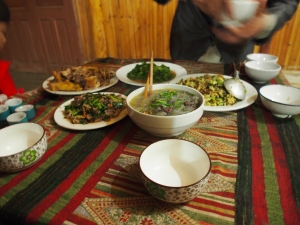 Dinner with our local hosts in Bac Ha.

The cooking fire was built in an adjecent building, and was fueled with bamboo, which as we learned is not only the main building material but is used in almost every aspect of life as well. In the evening, our host family invited us to a generous dinner with them and we had the chance to meet other relatives that lived a few houses away and came over for the joint meal. Unlike many other Asian countries that we visited so far, where people tend to stay awake way after nightfall, bed time in Bac Ha came at around 11pm, and everyone retreated into their own homes/rooms. I didn’t expect to sleep well, because I was not aware that the temperatures would drop so steeply after dark, but have to admit that I had a chilly, but pleasant night. 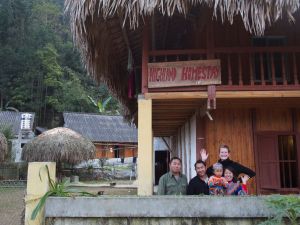 Our hosts and the owners of the Highland Homestay.

The next day we planned to hire a trekking guide to explore the mountain ranges and small minority villages of this part of the country. Since the family with whom we stayed the first night drew their main income from tourism, we hoped that someone we already met would also be able to show us the hinterland. So when our young host (and father of the two curious kids) offered us his tour guide services, we gladly accepted. We set out early and took the steep mud trail up and into the hills. Thick clouds of early morning mist obscured our view and added an eery flair to the landscape. Sometimes the clouds would allow a few glimpses of the fields and valleys far below, while at other times we lost each other out of sight only meters apart.

After an hour and a half of ascending and descending misty mountains, we arrived in the first small minority village. The harsh landscape and farming conditions have made water buffalos an indispensible help not only for farming, but as a general lifestock and family investment as well. They were the dominant sights in all the small villages we walked through. The people we met mostly kept to themselves and stayed in small group among themselves, with a clear distinction of gender roles. While the women tended after the children or stood together and chatted, the men played games or drank high volume corn liquor. As for the drinking, the way this worked was that one person would invite another one to raise their glass with them, drowning the liquor all in one shot and then shake hands. As guests we were asked to drink shots of the homemade booze together with the men, while the women stayed in the kitchen and mostly remained out of sight. I felt a little bit out of place among all the men, and I still wonder if they made an exception and allowed me to drink with them. Unfortunately, the men would not agree to shake hands with us unless we drank the whole glass in one draw. We tried our best to dodge the majority of the glasses going around, but ended up pretty tipsy when we continued our hike some time later. 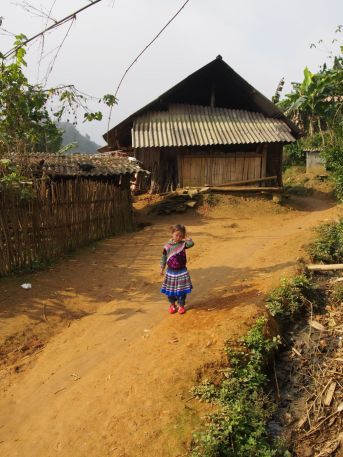 A little girl of the Black Flower Hmong in the first village we reached after crossing the misty mountains. 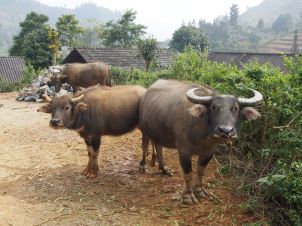 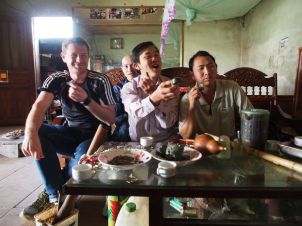 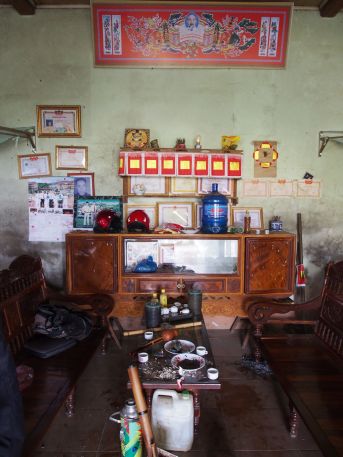 The living room of one of our hostsduring the trek. 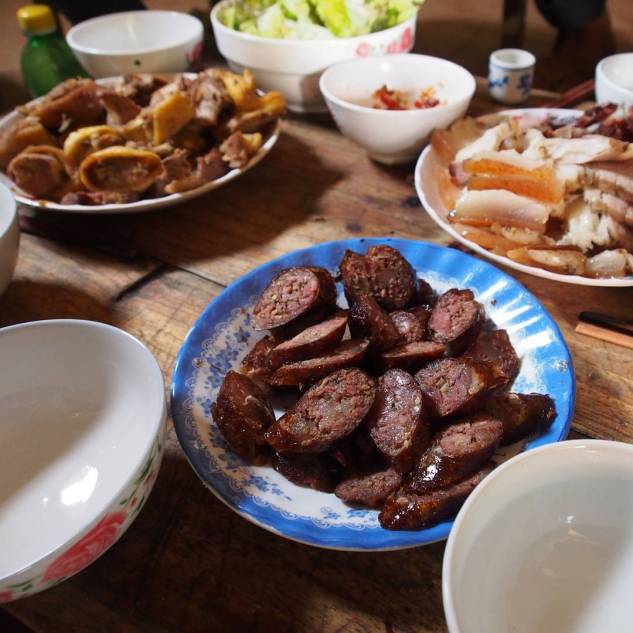 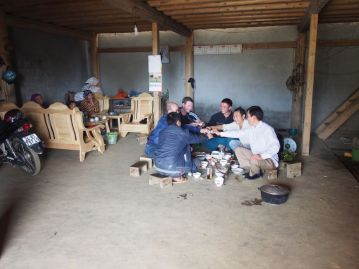 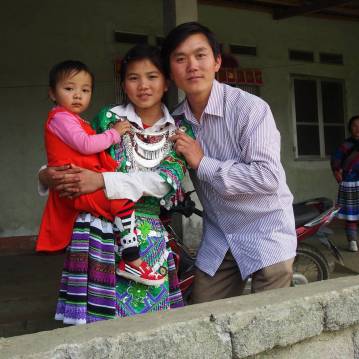 During the summer month, most local fruit markets all over the city offer watermelons either by the slice or as a whole. A 5 kg melon cost around 3 € and can be “squeezed” into three litres of juice. Chilled down with ice cubes and touched up with a few mint leaves its the perfect drink for your sunday breakfast.

An afterwork friday night food frenzy at a tepanyaki restaurant in Sanlitun by definition makes you wish you had more than one stomach to fill – it’s just so good. Obviously, an All You Can Eat & Drink deal doesn’t help in preventing an overkill of fresh prawns, scallops, sashimi, lamb chops, steak, and all the other good stuff that is showcooked right in front of our taste buds. The saddest moment comes when the waitress announces the last round before closing time and you find yourself leaving the restaurant together with the staff. 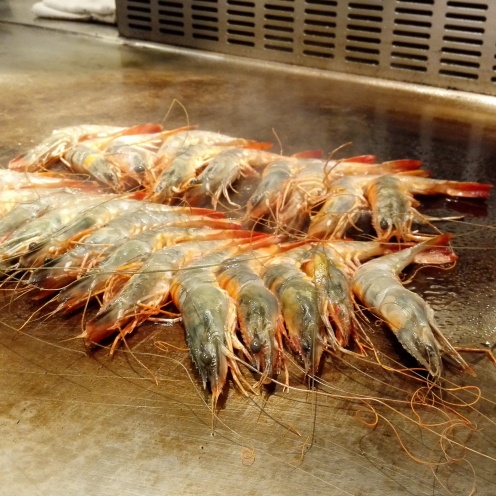 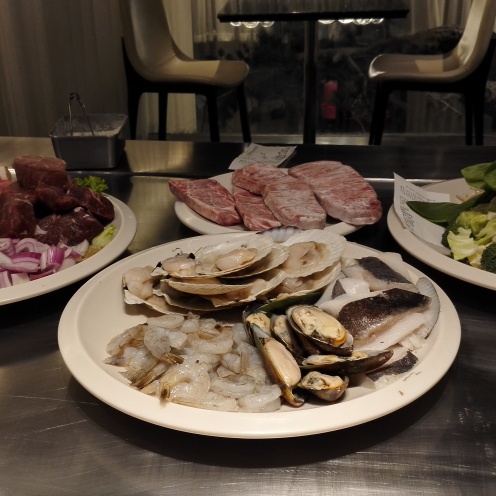 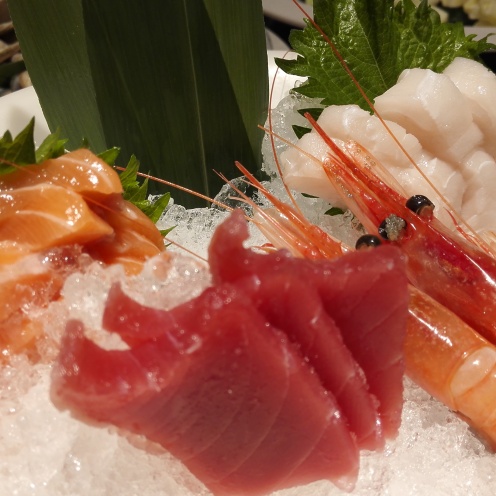 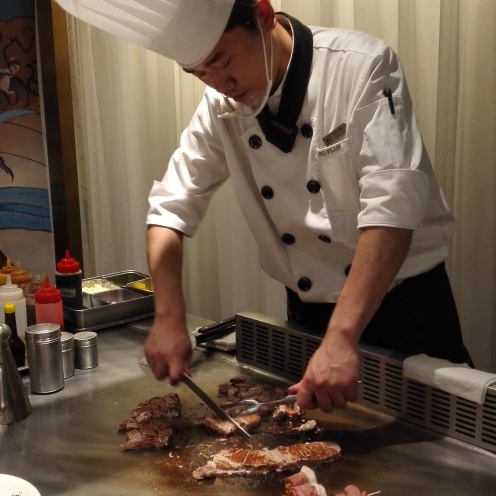 It came, it went, it conquered quick, I was there and then I quit.

Weekends are for relaxing and hanging out in the sun – even when (or maybe exactly because of) you have a cheetah scooter and a matching belly to show off. And if you choose the right spot to get your weekend game on (in this case in front of the entrance of Jingkelong) you don't even have to walk far for refreshments and a snack. #china #instachina #beijing #instabeijing #igersbeijing #hypebeijing #beijingers #peking #weekend #weekendgame #relaxing #sunbath #cheetah #scooter #foodbaby #belly #beijingbikini #beijingbelly #jingkelong #thatsbeijing #timeoutbeijing #cityweekendbj #ritnb #riceisthenewbread