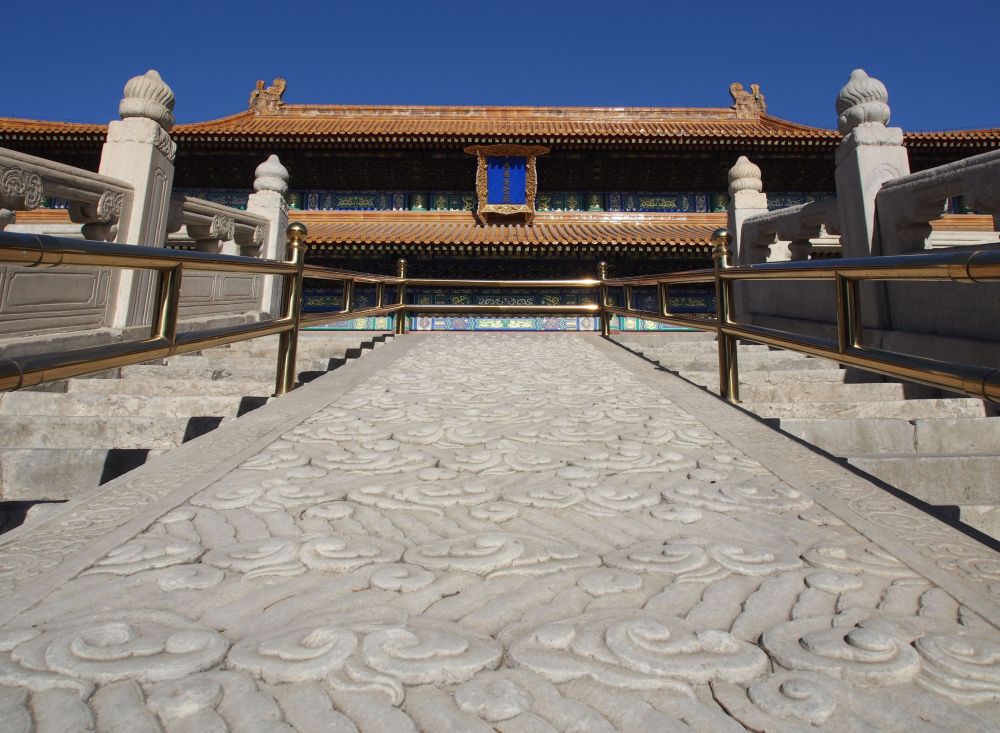 Today is another day of brilliant blue skies and sunshine in Beijing. Three weeks into the new year the weather is freezing cold, but due to the icy winds the air is clear again and you can see the mountains surrounding the city miles away. Naturally, we always want to make good use of bright days like this and decided to go visit the Temple of Ancient Monarchs, also called The Historical Emperial Temple of Beijing [Li Dai Di Wang Miao 历代帝王庙]. 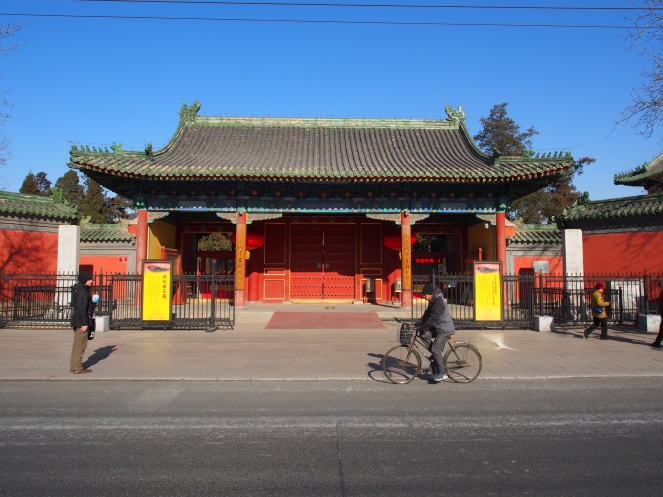 You can take the bus to Baitasi [白塔寺] and the temple will be only a few meters walk from the station. 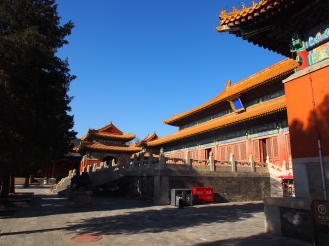 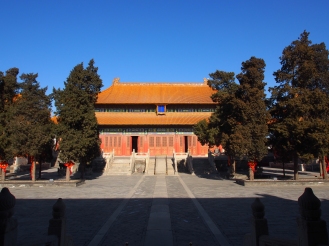 Built in the 9th year of the Jiajing period of the Ming dynasty (1530) the palace is constructed with a thickeave roof, spun gold Nan Mu wood pillars and a Jin Zhuan paved floor, all of which are regarded as the perfection of imperial construction.

Personally I get the impression that many of the sights in Beijing look quite alike and I’m sure architects or historians see the many unique features in every one of them. Risking to appear ignorant I’d say I rather visit the temples that are a bit off the trail and attract less visitors but appear to be carved from the same wood than join the masses and squeeze through the entrance of the Forbidden City. First time visitors to Beijing will probably disagree and will gladly endure the crowds to enjoy the magnificence of the top rated tourist sites. And I have to admit that you probably cannot travel to Beijing and later tell your friends and family that you wouldn’t visit the Lama Temple in fear of too many people. I will still try to convice you that the Temple of Ancient Monarchs is very worthwhile even though it might not be the number one priority on your Beijing bucket list. 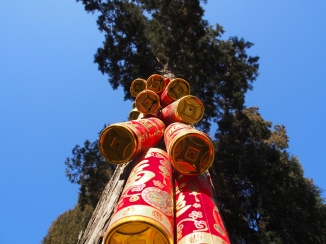 One week until Chinese New Year and the streets and tourist sites all over Beijing have a festive decoration. 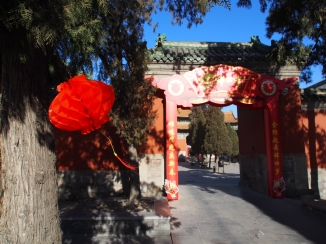 Laterns are hung from tree branches all over the temple. 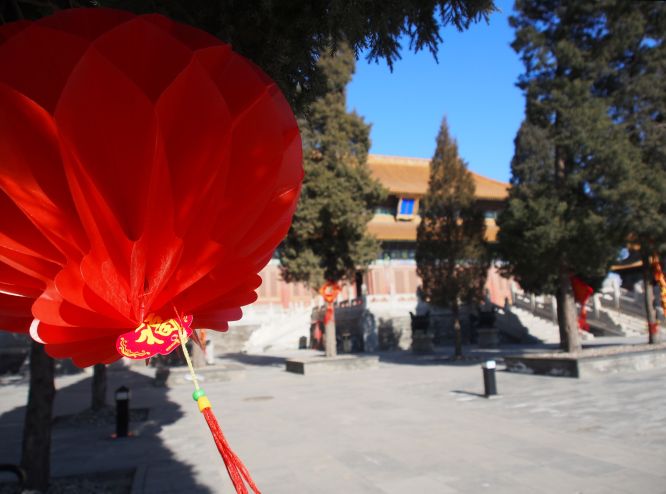 Since we only have one week left until Chinese New Year – a week of holidays with abundant fireworks and merry family get-togethers – red laterns and lucky symbol appeared all over the city virtually over night. Contrary to the jammed experience of tourist sights during the Spring Festival itself, today the Temple of Ancient Monarchs was almost completely deserted. On the one hand, that might be due to the fact that almost nobody is actually a “native” Beijing citizen and thus returned to their home provinces for the festival already. On the other hand minus 5 degrees C and a stiff wind probably convinced people to stay indoors despite the beautiful sunshine. 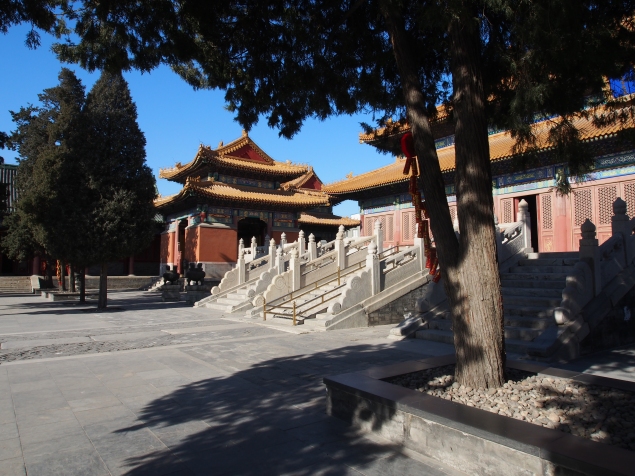 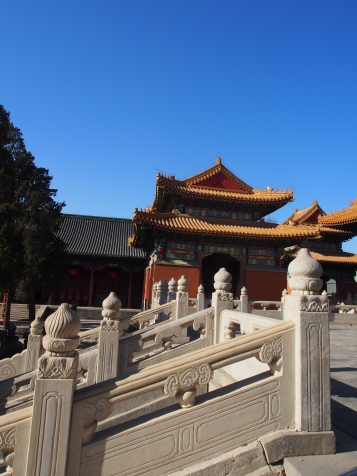 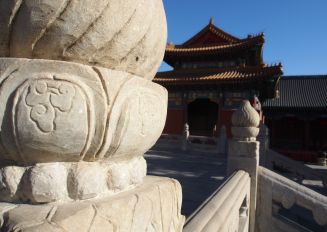 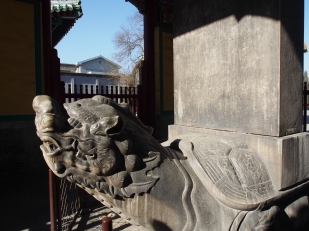 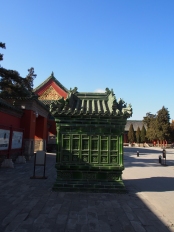 Composed of green coloured glaze, the furnace was used to burn the paper or silk prayers offered for sacrifices to the emperors whose tablets appear in the Imperial Temple. Rebuilt in 2004. 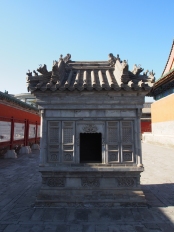 Built around 1530, this furnace was used to burn the paper or silk prayers offered vor sacrifices to the eminent ministers and generals whose tablets appear in the Imperial Temple. Rebuilt in 2004.

The Historical Imperial Temple of Beijing is easily seen in an hour’s time. There are three major halls, all of which contain religious artifacts. There are also two halls housing a large buddha, and two pavillons with traditional Chinese “turtles”. In the west annex hall leading off the main structure to the left you’ll find the small Guan Di Temple. Outside, a small steel oven is used to burn incense, while inside a regious entity may be adressed for prayers. In the east annex hall visitors may see the Well Pavilion, used to make sacrificial soup and to clean up after the animals were slaughtered for sacrifice.The well’s roof has a square hole in the center facing the mouth of the well, symbolizing that heaven and earth were linked together. 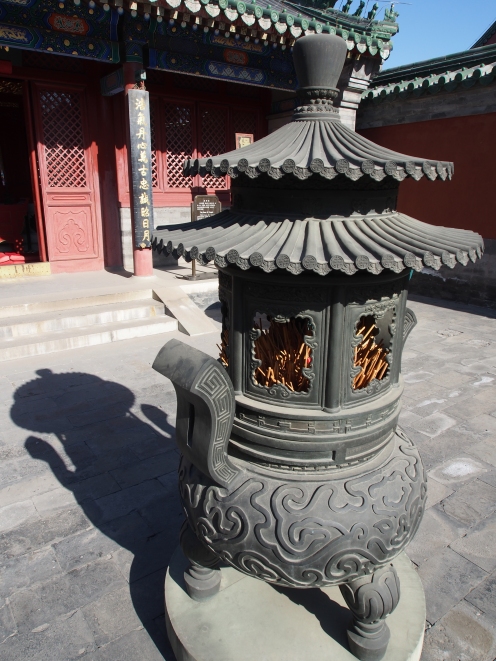 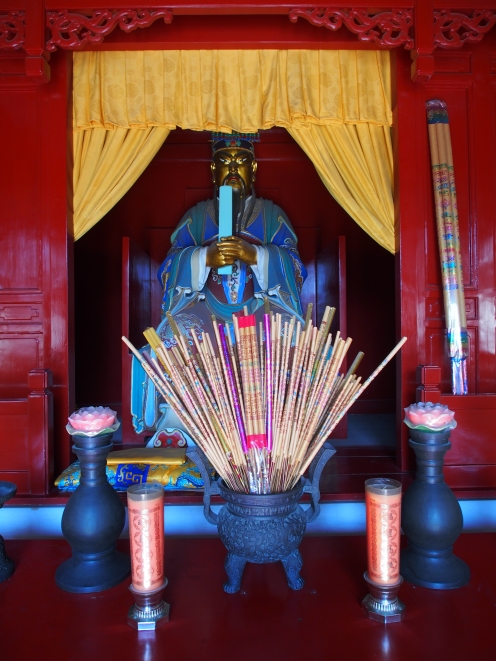 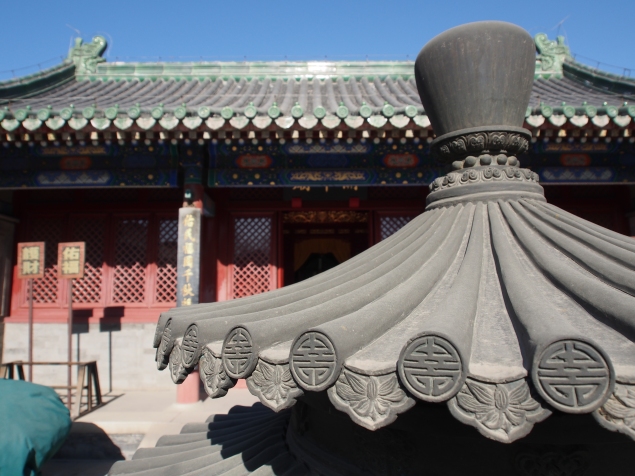 Details on the rood of the incense oven in front of Guan Di Temple. 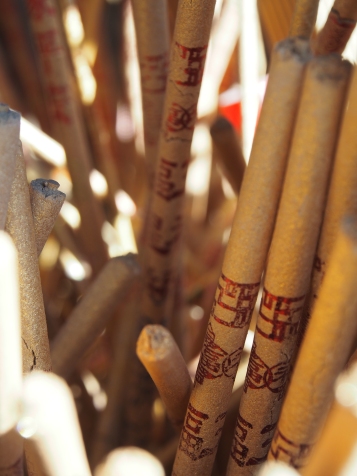 Sticks of burned out incense on front of Guan Di Temple. 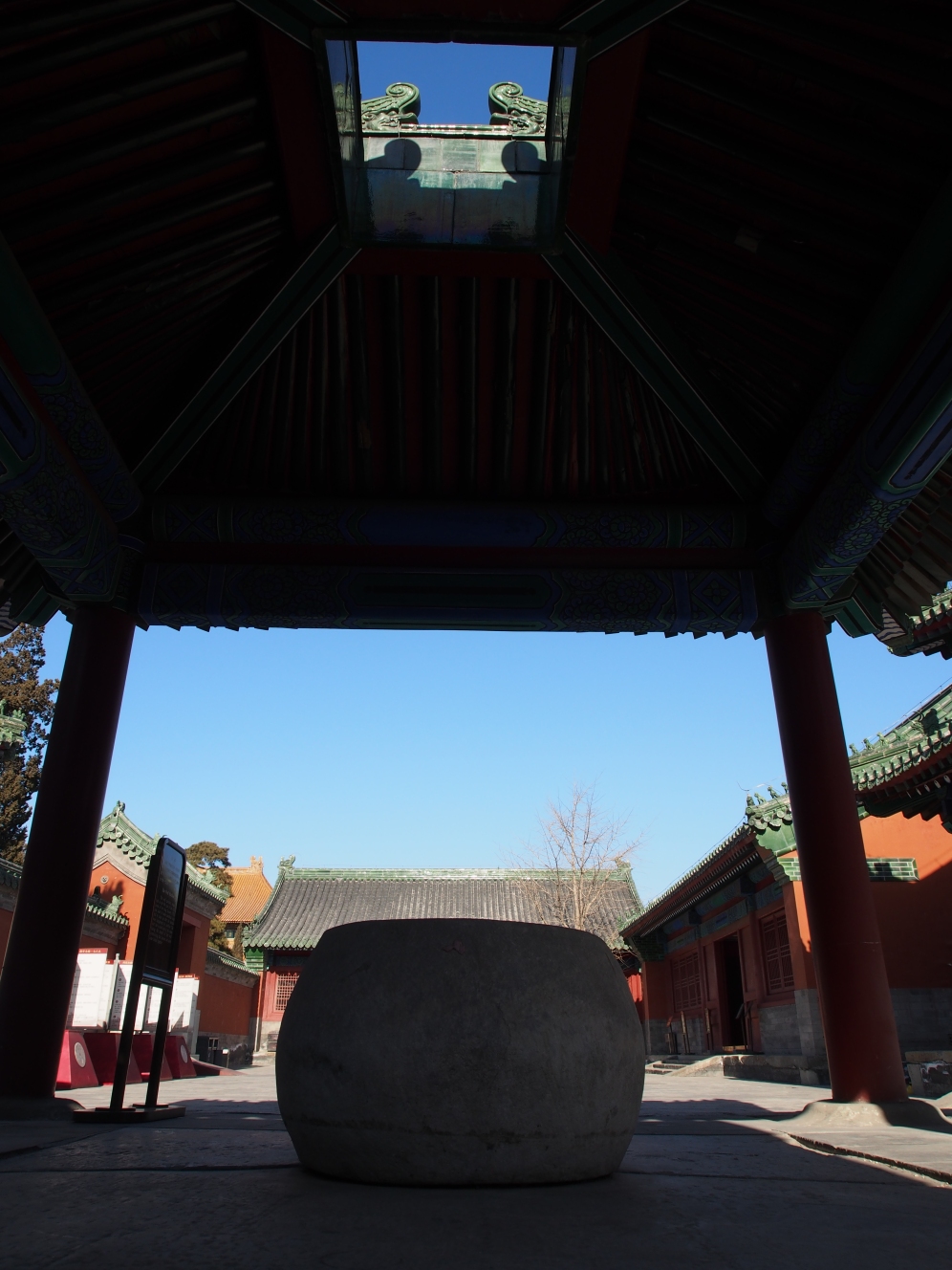 For an overview of the temple’s layout see the map below. 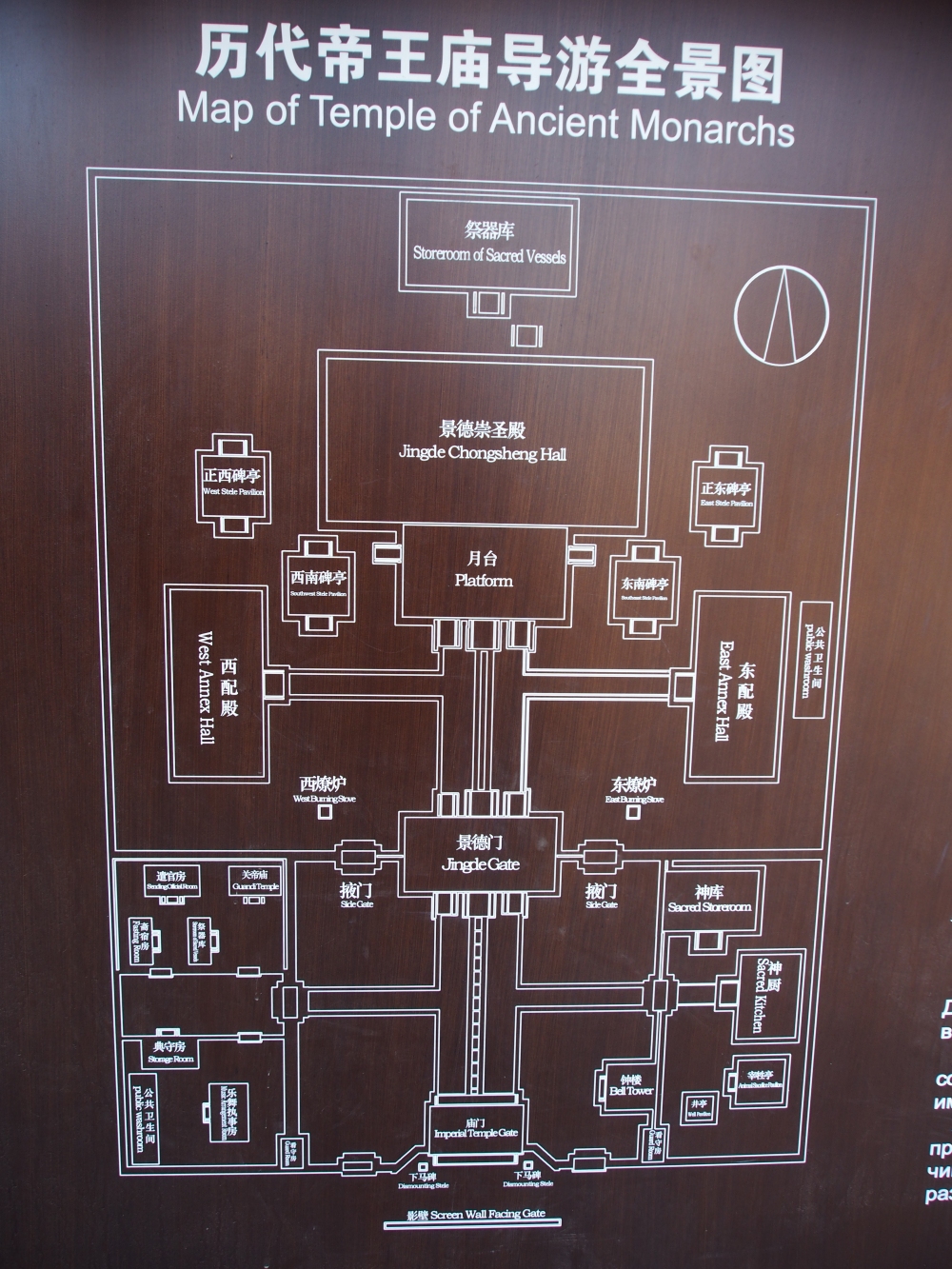