BAOBAO THE BRAVE Today we had a check-up with the vet in Wangjing and learned that Baobao has gained 400g over the last 10 days. His health improved significantly, and when we were asked how his activity level has been in those first few days…

October 07th, 2016 Little Bao is recovering fast! When we took him home two days ago after his second visit to the vet, he was still quite shaky on his legs, prefered to lie down rather than sitting up, and didn’t like to be touched… 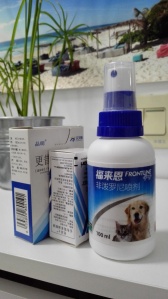 Baobao was also too weak to eat or drink by himself, so the doctor advised us to buy a can of goatmilk powder which could be administered using a small syringe. I later realized that they didn’t charge us for their services, only for the medication and nutrients we bought from their in-house drug store and pet shop. On top, they gave us three medical blankets and a syringe for free, so we could prepare a better sick bed for the kitten and feed himt the milk. Thanking everyone for their hour-long efforts, we hurried back home to get some of the goat milk into Baobao. He greedily licked some 20ml out of the syringe, before he grew tired again and had to lie down. That is why the vet advised us to try to feed him every two hours throughout the night, like a much smaller kitten, even though he already had teeth and should have been able to eat solid food. All night long the fleas kept dropping dead from his black furr, but he barely seemed to get stronger. By morning, he first started to drink one more syringe of the liquified goat milk powder, but then quickly got worse again, whining non-stop as if to call for his mother. He had us very worried after 30 minutes of meowing like this, and I remembered that one of the women in a Cat Community WeChat group had offered to meet us in another vet clinic in Wangjing. By the time we boarded a taxi to go there, his condition had degraded rapidly, only taking in small quick gulps of air, and he was unable to sit or lie down properly.

He was a pittyful sight and we feared that he was too sick to make it. Traffic was against us that day, and out Didi took more than 30 minutes to get from our home near the south entrance of Chaoyang Park to the Wangjing vet. I sat in the back with Baobao in his banana box next to me. I peaked through the small openings, he had his head stretched up high into the air, mouth half-way open, moving his jaw like he wanted to try meowing, but no sound came out. Jelte & I were both equally relieved the moment the cab driver pulled his BYD over to the curb and we got out quickly to look for the entrance to the clinic. Easy enough to find another pet owner carried her dog inside, so we followed right behind her looking for a doctor. The night before I contacted the Doc running the place via WeChat, and since she knew we were coming this morning she singled us out of the small group of newcomers and led us right into a quarantine room. When we opened Baobao’s banana box, he had collapsed against one side of the cardboard walls and was barely breathing. The second picture shows him before they started to treat him with glucose and an IV with fluids and vitamins. He was dehydrated and low on sugar, in addition to hypothermia. When they took his temprerature, he only measured a low 36 degree C, whereas a healthy kitten his age should at least have 38 degree C body temperature. Refilling his hot water bottle and wrapping him in a thick blanket, we stayed in the international clinic for over five hours until finally Baobao showed some improvement and they could take his blood for testing. Luckily, he didn’t show any viruses or bacteria, and apart from his eye infection, his malnutrition and flea infestation he had the day before, he was basically ok. The pictures below show Baobao in his blanket ontop the hot water bottle right after we arrived in the examination room in Wangjing. To help him breathe more easily, the vet plugged the outlet of the oxigen tank into an upturned paper cup with a whole in the floor and tucked the whole think onto the kittens muzzle. He stayed for this for about 30 minutes until he seemed to recover some of his strength. 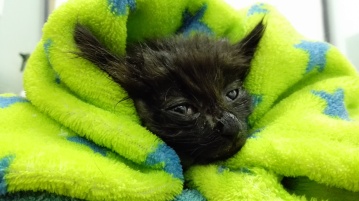 And then after all this trouble and pain, the little guy suddenly surprised us all when he started eating the wet food we wanted to feed him this morning. He didn’t even noticed it then, but now the smell of it drew him in and he gulped down the whole plate. 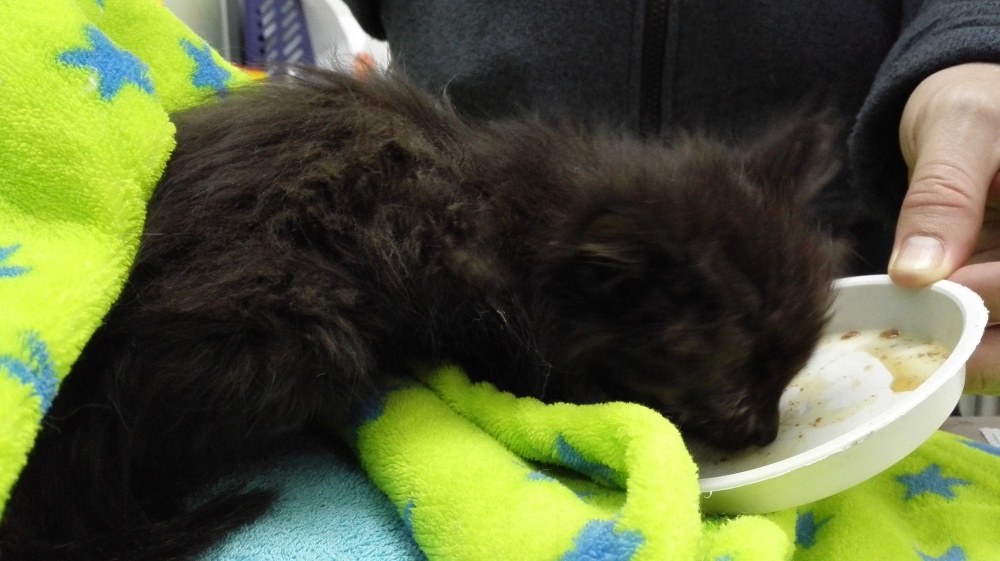 This sight alone repaid us for all the stress we had in the past 24 hours worrying if kitty would make it or not. The folks from the clinic did the rest to make our day, granting us major discounts on all the treatments because Baobao is a rescued street cat. It’s programs like this that hopefully encourages more people to take in stray cats rather than buying them in pet shops and feeding into a system of over-breeding. There are countless homeless kittens and grown cats out in the streets, and now that summer is almost over and Beijing’s harsh winter is about to set in, many of them will starve or freeze to death. In case you think about getting a pet yourself, please consider adoping one from the foster care in and around Beijing. Feel free to contact me at ritnb[at]yahoo.de if you seek further information about the topic of this blog post.